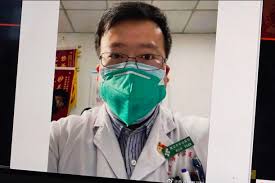 Six weeks after the death of Dr Li Wenliang - the Chinese doctor who tried to raise the alarm about the new coronavirus before it was even identified - Wuhan police have withdrawn their charges and apologized to his family.

As a reminder, Dr Li - who warned the public of a potential "SARS-like" disease in December 2019 - was questioned by local health authority, and warned:

"We solemnly warn you: If you keep being stubborn, with such impertinence, and continue this illegal activity, you will be brought to justice - is that understood?"

Dr, Li was later summoned by Wuhan police to sign a reprimand letter in which he was accused of "spreading rumors online" and "severely disrupting social order."

And now, in a Weibo message, Wuhan Police apologized to the dead doctor's wife for their mistreatment:

Trump's Hostile Actions Against China Based on Big Lies