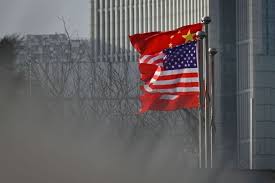 Among the myriad, earth-shattering geopolitical effects of coronavirus, one is already graphically evident. China has re-positioned itself. For the first time since the start of Deng Xiaoping's reforms in 1978, Beijing openly regards the US as a threat, as stated a month ago by Foreign Minister Wang Yi at the Munich Security Conference during the peak of the fight against coronavirus.

Beijing is carefully, incrementally shaping the narrative that, from the beginning of the coronovirus attack, the leadership knew it was under a hybrid war attack. Xi's terminology is a major clue. He said, on the record, that this was war. And, as a counter-attack, a "people's war" had to be launched.

Moreover, he described the virus as a demon or devil. Xi is a Confucianist. Unlike some other ancient Chinese thinkers, Confucius was loath to discuss supernatural forces and judgment in the afterlife. However, in a Chinese cultural context, devil means "white devils" or "foreign devils": guailo in Mandarin, gweilo in Cantonese. This was Xi delivering a powerful statement in code.