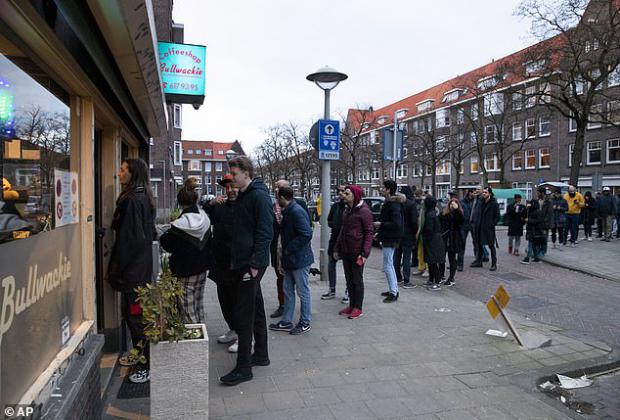 The weed suppliers will now be open for takeaway purchases during Holland's virus lockdown after a Dutch government U-turn on Monday night.

Cannabis smokers had queued around the block to stockpile cannabis when the ban was initially announced on Sunday, putting a twist on the usual search for pasta and toilet paper.

However, another Dutch institution - the sex clubs and brothels of Amsterdam's red-light district - will remain closed until April 6.

The coffee shops were re-opening today after the Dutch government revised its quarantine measures on Monday night.

Authorities feared that closing the coffee shops completely would promote the drug trade on the streets.

However, consuming cannabis at the cafes themselves - which often have a special ventilated room for customers to smoke their joints - will be banned during the lockdown.

The queues built up within minutes on Sunday after the Dutch health and education ministers gave a televised press conference announcing the closure of many businesses, along with all Dutch schools.

Customers in Amsterdam, Eindhoven, Utrecht and the Hague lined up in their dozens to stock up for what could be a lengthy quarantine.

Brilliant and Brave parent objects to Woke culture, soft racism, and the culture of fear at schools

It's an UpperClass thing: Labor have become The Australian Wokers Party and the workers are fed

Jim Jordan calls out Fauci on 'Ingraham Angle': Tell us when we get our rights back

Where Are All the Bob Ross Paintings? We Found Them.