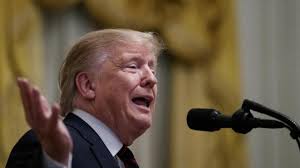 Privately, he worries about virus-carrying journalists on Air Force One.

"He is trying to control the narrative and he can't," a former West Wing official told me.

"So much FAKE NEWS!" Trump tweeted this morning. "He wants Justice to open investigations of the media for market manipulation," a source close to the White House told me. Trump is also frustrated with his West Wing for not getting a handle on the news cycle. "He's very frustrated he doesn't have a good team around him," a former White House official said. On Friday he forced out acting chief of staff Mick Mulvaney and replaced him with former House Freedom Caucus chair Mark Meadows.

Trump has also complained that economic adviser Larry Kudlow is not doing enough to calm jittery markets. Last week Kudlow refused Trump's request that Kudlow hold an on-camera press briefing, sources said. "Larry didn't want to have to take questions about coronavirus," a person close to Kudlow told me. "Larry's not a doctor. How can he answer questions about something he doesn't know?"