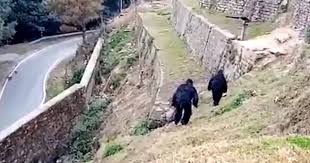 Guards have dressed up as gorillas to scare off monkeys near India's border while the country tries to manage a growing population of rampaging macaques.

Footage shows officials on the Indian side of the border wearing gorilla-type costumes and chasing a troop of macaques back to the jungle.

The booming primate population has reached crisis levels in India in recent years with spates of attacks on humans, including babies being killed by the animals.

In the short clip, the men-turned-apes can be seen emerging through the door of the Mirthi ITBP camp station in India's Eastern Uttarakhand province, and the vicious creatures immediately scatter.

As the guards slink down the highest wall, keeping in character with a high knuckle walk, most of the monkeys have already bolted away from the compound.

The closer the guards get, the more spooked the macaques become, and they dart across the road into the nearby jungle.

To ensure all of the pests have left, the border guards continue along the lower wall.

As they near the end of the platform, it seems that one of the ferocious pests is brave enough to wait a while.

After standing up tall and showing their gorilla dominance, the last macaque gives in and slinks off reluctantly.