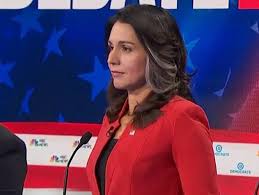 Gabbard's request comes after the Democratic National Committee's (DNC) updated qualifications barred her from participating in the upcoming event in Phoenix, according to the Hill:

"To keep me off the stage, the DNC again arbitrarily changed the debate qualifications," Gabbard wrote in a subsequent tweet.

"Previously they changed the qualifications in the OPPOSITE direction so Bloomberg could debate. I ask that you stand w/ me against the DNC's transparent effort to exclude me from the debates," she stated.

To take part in the event scheduled for March 15, candidates must have at least 20 percent of the delegates awarded up to that point, according to Breitbart News.

The previous debate requirement allowed a candidate to participate if he or she had a single pledged delegate. If the DNC stuck to the previous rules, Gabbard, who did not qualify for any of the debates ahead of the caucuses in Iowa and Nevada or the primaries in New Hampshire and South Carolina, would have been able to participate.

My Investigation of the So-Called COVID Deaths