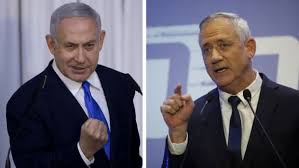 Prime Minister Benjamin Netanyahu is on track to win 59 seats for his bloc of right-wing and religious parties in Monday's election, down by one from the 60 predicted by the initial exit polls. The new prediction leaves him two short of a majority in the Knesset.The first polls indicated that Netanyahu's Likud won 36-37 seats. Its allies in Shas, UTJ and Yamina won 9, 7-8 and 6-7 respectively. The polls showed Blue and White with 33 seats, its ally Labor-Gesher-Meretz 6-7, the Joint List 14-15 and Yisrael Beytenu 6-8.

When Channel 13 updated its numbers at around 1 a.m. Israel time, Gantz gained one seat to 34 and the blocs shifted slightly, leaving the right-wing with only 59 seats.Channel 12 also updated its numbers, giving Likud 37 seats, Blue and White 32, Arab Joint List 15, Shas 9, Yisrael Beytenu 7, UTJ 7, Labor-Gesher-Meretz 7 and Yamina 6.However, by 4am, Kan News had Likud on 36 seats and Blue and White on 33, with the right bloc holding a total of 59.The numbers are expected to change overnight. The votes of soldiers, who tend to lean to the right, have not yet been counted and the Joint List tends to go down a seat when the soldiers' votes are added. But, if the Right does not obtain its 61st seat, it could end up being because the far-right Otzma Yehudit refused Netanyahu's repeated requests to quit the race.