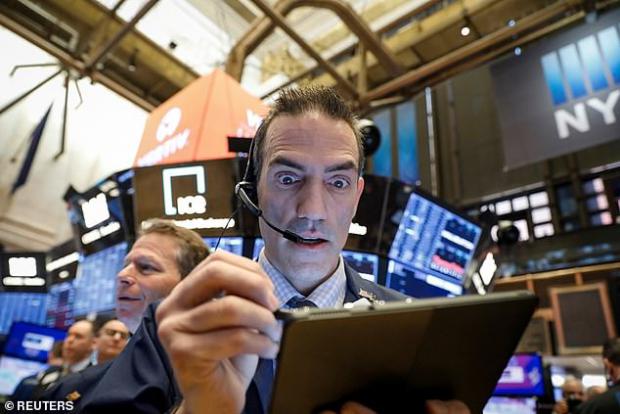 The Dow Jones Industrial average was down 357 points at the closing bell, or 1.4 percent, marking seven straight days of losses and the biggest weekly drop since the 2008 global financial crisis

Investors are reeling after virus fears wiped nearly $3 trillion off the combined market value of S&P 500 companies this week, with the index confirming its fastest correction in history in volatile trading on Thursday.

Globally, some $6 trillion, or about 10 percent, has been erased from stock values as markets in Asia and Europe plunged on fears that the outbreak will shrivel corporate profits there. At their heart, stock prices are determined by expectations of a company's future profits.

Even as the outbreak eases in China, investors have been rattled by the rapid spread of the disease in other countries, which now account for about three-quarters of new infections.

As the world prepares for a likely pandemic, an inversion of the U.S. Treasury yield curve deepened further in a clear sign of recession. All three main stock indexes are set to record their sharpest weekly drop since the global financial crisis in 2008.

'This selling is a bit extreme for something that we don't know enough about,' said Robert Pavlik, chief investment strategist at SlateStone Wealth LLC in New York.