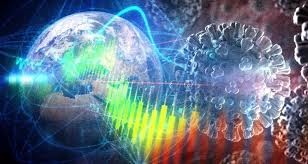 Namely, the near universal belief that central bankers could print, peg and palaver the main street economy into unfailing expansion and ever rising prosperity and that there were essentially no macro-risks to soaring stock prices that their toolkits couldn't contain and counteract.

That misbegotten belief had huge untoward consequences. It made economies brittle with too much leverage, financialization and speculation; and fragile with too few shock absorbers and insurance mechanism such as just-in-case inventories, second suppliers and local sources for physical production and back-up liquidity lines and balance sheet reserves for financial operations.

Then came the Black Bat of 2020 (or whatever) with its toxic economic contagion. Racing with virtually lightening speed through an infinitely complex and deeply integrated global supply chain anchored in the Red Ponzi, the breakdown of economic activity is already proving that the central banks are not omnipotent after all.

CDC Director: Coronavirus Death Toll Will Be 'Much, Much, Much Lower' than Projected