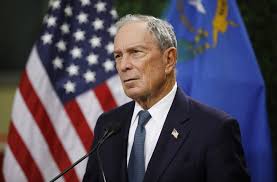 While he was touting his $100 million in donations to House Democrats, he essentially bragged that he "bought" 21 congressional Democrats their seats in 2018 midterms.

"Twenty-one of those were people that I spent $100 million to help elect," he continued.

"All of the new Democrats that came in and put Nancy Pelosi in charge and gave the Congress the ability to control this president, I bough-... I got them."

Needless to say the backlash was swift and merciless.

The billionaire founder of Bloomberg LP has faced deep criticism for leapfrogging other Democratic primary contenders in the national polls, despite being a latecomer.

He's faced labels of being an "oligarch" and essentially muscling, or rather buying, his way into debates based on his limitless campaign self-funding.