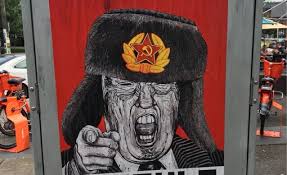 Their lapdoggery to the Bush regime backfired on them during the WMD lie operation and the resulting war of aggression. Then came their participation in the fraudulent business reporting leading up to the 2007-2009 Wall Street crash, and their big lies afterward that "no one could have imagined." The next big rupture arrived in 2015-2016, their million-minutes spent on preemptive coronations of Trump as one candidate and Clinton as the other, and their responsibility for the unexpected result, which they have tried ever since to blame daily on a vague, ever-present "Russia."

In the last few years, it is true that a few million mostly well-meaning people have partaken in the fandom and breaking-news rituals of the Extended Maddowverse. A similar number have bought into the sorry fantasies of Murdochworld, in which a heroic manly Trump is always about to drain the swamp that spawned him. These groups are like the devoted audiences of Game of Thrones or Star Wars, but smaller. Of course it's a far more serious matter, because they don't distinguish between their favorite shows and reality, and they are politically influential people, relatively speaking. A third minority, meanwhile, also small if growing, reject both sides of the #Russiagate coin.

Coronavirus XIV: The Good News is Still There But Not Reported By Mainstream Media