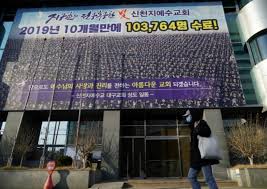 Following reports that a strange Christian cult might be behind the outbreak in Daegu that kickstarted South Korea's COVID-19 crisis, readers around the world have been curious to learn more details about the Shincheonji Church of Jesus, the small but surprisingly extensive church that follows a man named Lee Man-hee who claims to be the second coming of Jesus Christ.

Americans will recognize this as a similar concept to the Mormon theology. In South Korea, it's one of several high-profile Christian cults with a doomsday-oriented philosophy (the leader of the Shincheonji will allegedly take thousands of followers with him to heaven when the world ends).

But in China, a cult like this is extremely illegal. Yet, somehow, in a state that's constitutionally athiest, cults like this survive and sometimes flourish as it's one of the few options that ordinary people have to do something genuinely subversive.

Churches like Shincheonji survive in a sort of tense standoff with the government, with scrutiny coming in waves. Typically, any kind of high profile attention would be bad for the church because it would rouse the authorities. In which case, the story that we're about to share will likely be very, very bad for the church. But unfortunately for them the cat is already out of the bag.

CDC Director: Coronavirus Death Toll Will Be 'Much, Much, Much Lower' than Projected