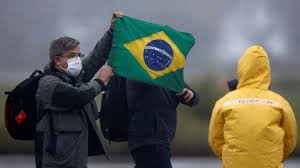 The virus has now spread to every continent except for Antarctica.

The 61-year-old man, who recently visited Italy, was flagged by a hospital in Sao Paolo, according to Reuters.

Update (1900ET): We've got some (potentially) big news. Brazil's Health Ministry said a man has tested positive for the coronavirus on in initial test. If it's confirmed in a second test, it will be the first case in South America.

The virus has already spread from Asia to Europe, North America, Australia and Africa.

On that note, El Salvador on Tuesday announced it would prevent entry of people from Italy and South Korea.

In Spain, a 7th cases has been confirmed in under 24 hours. Just over a day ago, Spain had zero confirmed cases.

Though it's unconfirmed, there's a rumor floating around twitter that an Iranian official who met with the Ayatollah a few days ago has tested positive for the virus.

In The New Age Of Deception, COVID-19 Has Hastened The Old Collectivism

Here's How You Can 3D-Print Masks At Home

Why Taiwan Hasn't Shut Down Its Economy