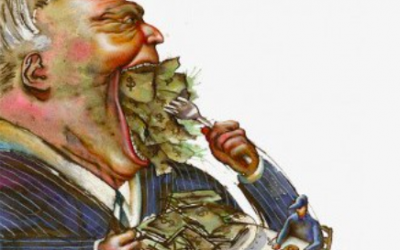 The United States was seen as abandoning the Kurds, some of whom had assisted the United States in the fight against ISIS and other terrorist groups. But the indignation over the latest US policy shift in the Middle East is farcical considering the long record of US double-crosses. Rather than the triumph of American idealism, recent US policy has been perpetual perfidy leavened with frequent doses of idiocy.

Almost none of the media coverage of the Turkish invasion and flight of Kurdish refugees mentioned that President George H.W. Bush had urged the Kurds and other Iraqis to "take matters into their own hands and force Saddam Hussein, the dictator, to step aside" just before the start of the US bombing campaign in 1991 in the first Gulf War. After it became clear that the US military could not protect the Kurds from Saddam's backlash, US policymakers basically shrugged and moseyed along. As a CNN analysis noted in 2003, "Bush refrained from aiding Kurdish rebels in the north, although he finally sent troops and relief supplies to protect hundreds of thousands of fleeing Kurds who were in danger of freezing or starving to death. Bush has never regretted his decision not to intervene." George H.W. Bush's abandonment and betrayal of the Kurds did nothing to deter the media and political establishment from praising him lavishly after he died in late 2018.

US meddling in the Middle East multiplied after the 9/11 attacks. Even though most of the hijackers were Saudis who received plenty of assistance from the Saudi government, the George W. Bush administration seized the chance to demonize and assault Saddam Hussein's Iraqi regime. He portrayed his invasion of Iraq as American idealism at its best. In his May 1, 2003, "Mission Accomplished" speech aboard the USS Abraham Lincoln, Bush hailed "the character of our military through history" for showing "the decency and idealism that turned enemies into allies." Speaking three weeks later at a Republican fundraiser, he bragged, "The world has seen the strength and the idealism of the United States military." Washington Post columnist David Ignatius declared in late 2003 that "this may be the most idealistic war fought in modern times." The torture scandal at Abu Ghraib and elsewhere in Iraq has not been permitted to deter the recent embarrassingly fulsome praise of George W. Bush by the establishment media.

The Bush administration and its media allies produced one smokescreen after another to justify the war. Almost all the pre-invasion broadcast news stories on Iraq originated with the federal government. PBS's Bill Moyers noted that "of the 414 Iraq stories broadcast on NBC, ABC, and CBS nightly news, from September 2002 until February 2003, almost all the stories could be traced back to sources from the White House, the Pentagon, and the State Department." A 2008 report by the Center for Public Integrity found that "in speeches, briefings, interviews and other venues, Bush and administration officials stated unequivocally on at least 532 occasions that Iraq had weapons of mass destruction or was trying to produce or obtain them or had links to al-Qaida or both." The report concluded that the "false statements — amplified by thousands of news stories and broadcasts" created "an almost impenetrable din for several critical months in the run-up to war." Bush's falsehoods on Iraq proved far more toxic than anything in Saddam's arsenal. But the exposure of the official lies did not deter Defense Secretary Donald Rumsfeld from equating criticizing the Iraq war with appeasing Adolf Hitler.

While Trump Fights Coronavirus, Pompeo's On The Warpath

Dallas man was forced to take a vaccine for the covid 19 at parkland hospital Smh!

The IMF Eyes World Domination as US Heads into Great Depression

Seriously. How much longer are we going to put up with all the BS..???