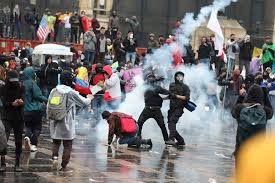 Many of the massive anti-neoliberal protest movements that exploded across the globe last year have pressed on into 2020, especially those that rose up throughout Latin America. Many of those demonstrations — clearly newsworthy due to their enormous size, composition, and motives — were and continue to be ignored by prominent English language news outlets, essentially creating a media blackout of these movements.

This trend has been particularly magnified in Latin American countries whose current governments are closely allied with the United States, with Colombia, in particular, standing out. Despite being faced with protests from hundreds of thousands of people fueled by anger over state corruption, proposed neoliberal reforms and a spike in murders of social leaders, the unrest in Colombia has garnered remarkably little international media attention.

In contrast, U.S.-supported right-wing movements attempting to topple socialist governments like those in Venezuela and Bolivia have received a great deal of coverage and open support from both the media and the political class.

It is certainly telling that international media outlets largely ignored the protests of Colombia's teachers, who were motivated to act largely due to a dangerous wave of violence targeting them incited by the government itself, leading to several murders and hundreds of death threats in the span of just a few months. Colombia's President Iván Duque's political mentor Álvaro Uribe, himself president between 2002 and 2010, accused the country's teachers of brainwashing the youth: "Teachers only teach them to yell and to insult, not how to debate, warping their minds," he said.