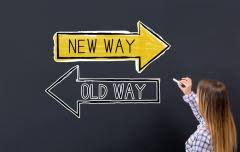 What a wonderful gathering of students today, on this impressive and beautiful campus. We can see why Hans Sennholz loved this place, and why Drs. Herbener and Ritenour so enjoy living and teaching here. You are all too young to serve as the "remnant," so we will consider you the vanguard instead. I'm always impressed by young people with an interest in serious scholarship and ideas, who have the intellect to read 900-page books. We are told nobody reads anymore, and certainly not dense tomes about economic theory, but this raises a question: are the rare people who do read such books likely to be more important or less important in the future? I suspect the former.

Imagine how pleased Ludwig von Mises would be by this conference today, to know people still find his work vital and relevant nearly half a century after his death. He is far better known today, and far more widely read, than during his lifetime. And most of his important works today are available in multiple languages, online, free and instantly to anyone around the world. What more could any important thinker want?

There is a wonderful French expression, élan vital, which technically translates to "vital impulse" or "vital force" in English. The early twentieth-century French philosopher Henri Bergson developed the term to describe the creative force within an organism which drives growth, change, and desirable adaptation.