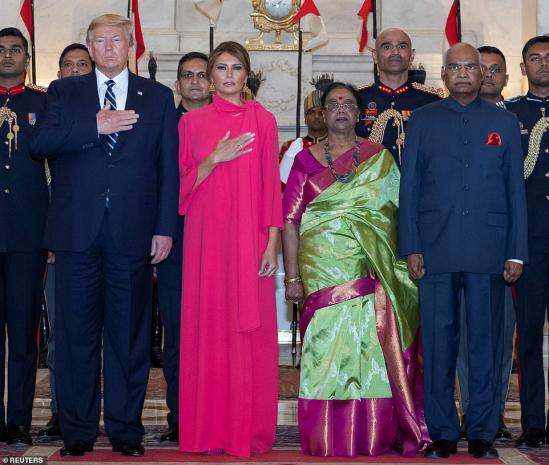 It was the second outfit by the designer worn by the 49-year-old first lady, who wore an $1,800 white, floral-embroidered frock from the same brand earlier in the day.

However, while they were created by the same fashion house, the two looks could not have been more different; for her evening ensemble, Melania chose a floor-length, long-sleeved, high-neck gown, which which was embellished with a long ribbon tie that hung down the front and back of the dress.

Unusually for the first lady, she was pictured wearing flat shoes - a stark contrast to the high heels she is known to favor, and was seen wearing just a few hours before arriving with her husband, President Donald Trump, at the evening event, which took place at Rashtrapati Bhavan, the official residence of the President of India.