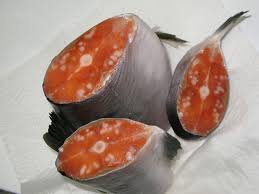 The parasitical creature is called Henneguya Slminicola and lives inside salmon

After mapping its genes researchers found it had no mitochondrial genome

The salmon parasite is part of the same family as jellyfish, coral and anemones

A jellyfish-like parasite is the first ever animal discovered that lives without oxygen  and it could shed light on how alien life could exist on other planets.

Researchers at Tel Aviv University in Israel say the jellyfish-like parasite spends its life clinging to the inside of North Pacific salmon in a low to zero-oxygen environment.

The organism doesn't have a mitochondrial genome - that is the system that breaks down oxygen that multicellular organisms use to power their cells and breathe.

Henneguya salminicola isn't new, it is a common salmon parasite and part of the same family as corals and jellyfish - but its genome has only just been mapped.

"All The Jobs Are Gone"

"Modern" farming practices linked to ALL forms of malnutrition

Did Capital One Run Into A Commodity Prepay Wall?

'I ordered a chicken and an egg from Amazon... I'll let you know':

Worse Than 2008: We Are Being Warned That The Coronavirus Shutdown...

Colorado father, 33, is handcuffed in front of his six-year-old daughter-