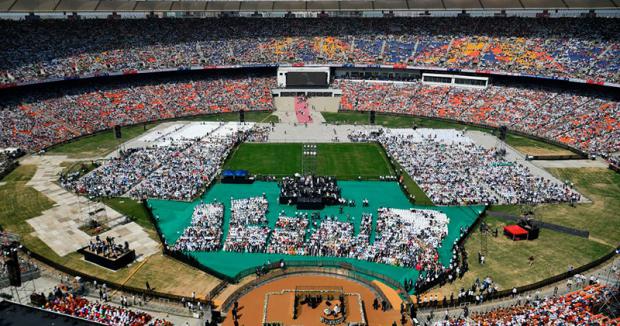 Over a HUNDRED THOUSAND people crammed into a gigantic sports stadium in India Monday to give President Trump a Bollywood level greeting on his first state visit to the country.

"Namaste, and hello to India. This is such a great honor," Trump told the rapturous audience.

"The first lady and I have just traveled 8,000 miles around the world to deliver a message to every citizen across this nation: America loves India, America respects India, and America will always be faithful and loyal friends to the Indian people." the President added.

He announced that India will purchase several military-grade helicopters from the US as part of a defense deal valued at more than $3 billion.

Trump revelled in the cheers of those packed into the Sardar Patel Stadium, one of the largest on the planet.

"The United States looks forward to providing India with the best and most-feared military equipment on the planet. We make the greatest weapons ever made — airplanes, missiles, rockets, ships. We make the best, and we are dealing now with India," Trump urged.