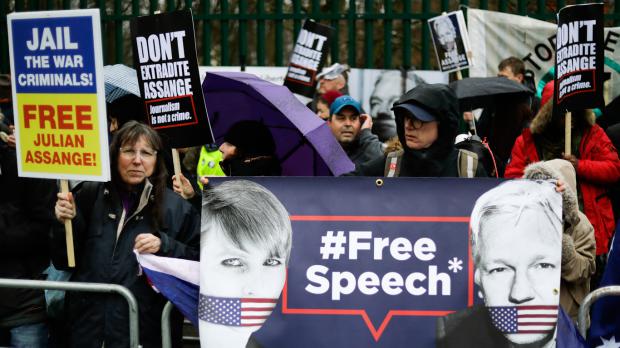 The extradition trial of Wikileaks co-founder Julian Assange got underway at Woolwich Crown Court in London today. Assange, 48, is wanted by the U.S. government on 18 charges of hacking and breaches of the Espionage Act, specifically for the publication of evidence leaked by Pvt. Chelsea Manning that detailed evidence of American war crimes in the Middle East. If found guilty he faces up to 175 years in prison.

The prosecution, led by James Lewis, Q.C., began by reading out a damning statement from five leading media organizations, The Guardian, The New York Times, El País, Der Spiegel and Le Monde, all of whom had partnered with Wikileaks, gratefully publishing the group's revelations but now condemned them, helping his prosecution.

"We deplore the decision of WikiLeaks to publish the unredacted state department cables, which may put sources at risk," they said. The prosecution is alleging that Assange recklessly published a huge trove of documents containing the names of American agents and informants, putting their lives in danger, and that he solicited information from Manning, encouraging her to break the law. That neither were in the United States when this took place, Lewis said, was irrelevant, as Manning was still a member of the U.S. armed forces. Therefore, he told the court, the case was one of "straightforward criminality."

Many mainstream outlets like the BBC and The Guardian also framed Assange as having "put lives at risk" – echoing the attack from the prosecution in their headlines. Media were also strongly supportive of his arrest from the Ecuadorian embassy last year, celebrating that the "delusional, childish narcissist" poisoning America with his "vile spite" was finally about to "face justice." Former Newsweek journalist Tareq Haddad noted that the press room was packed for the U.S. government prosecution team's statements but was half empty by the time the defense began.

Breaking: @khrafnsson leaves courtroom and asks "why aren't we here talking in court about the war crimes, the assassination of innocent civilians?" #assange@TheCanaryUK pic.twitter.com/zXCRjqq5db

Communism In The United States? Say Goodbye To The Constitution!