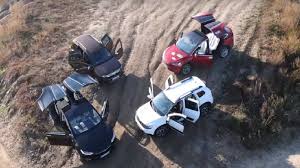 Unique to the Tesla in this challenge is its sophisticated dual-motor electric powertrain. The system seems to be able to more predictably maintain traction than the archaic 4WD setup found in the Dacia Duster.

There are several instances in the video in which you'll see the Model X move about rather graciously, whereas the other vehicles are losing traction and/or having to really trounce the gas pedal to continue moving forward. Honestly, we didn't expect the Model X to perform as well as it did, but it's pretty clear from the video that its dual-motor system, advanced traction control and high-tech electronics help it to capture the off-road win in this contest. The only thing holding the X back from being a more serious off-roader is ground clearance and perhaps some beefier tires.

In the near future, we'll likely get to see the Model X and maybe even the Tesla Cybertruck go up against a new kind of Hummer in an off-road challenge similar to this. That new Hummer will be electric though and we're sure it'll be highly capable off the road.

Grab a look at the video above to see just how well the Model X performs off the tarmac.

If you watch the video through to the end, you'll get some bonus footage featuring a few tug-of-war matchups. You may be surprised to see the Hummer H1 make an appearance in the video too.