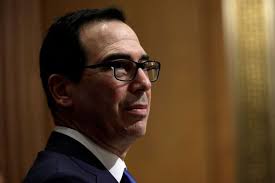 Following this weekend's G-20 meeting in Riyadh, where the world's 20 largest economies promised to keep a close watch on the outbreak but stopped short of calling it a downside risk to the global economy, probably for fear of spooking the market (these are the finance ministers, after all), Mnuchin sat down for an interview with Reuters.

The contents of that interview were released overnight, and perhaps the most notable comments were related to trade.

Mnuchin struck an 'optimistic' tone about the outlook for a US-UK trade deal, something that has been the subject of much speculation following Boris Johnson's decision to defy Washington and allow Huawei equipment to be used in the construction in the UK's 5G networks.

Reports claimed that President Trump berated Johnson during a 'diplomatic' phone call over the decision, and even hinted that it could impact the trade deal (of course, we suspect Johnson knows what he's doing, and will use Huawei as a chit during negotiations).

Trump's personal feelings aside, the Treasury secretary, a noted dove on global trade, believes a deal will be struck soon.

"I'm quite optimistic. I think the prime minister and the president have a very good relationship," Mnuchin told an audience at the Chatham House think tank in London.