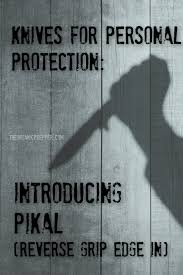 Author's preface: This article was written several years ago, and represents just one aspect of the total package of self-defense. I still believe in the efficiency of this method, but do not want to give the impression that this is the one answer to edged weapons conflict. That being said, please enjoy this article, as not much is written on this particular subject. This will be the first in a series of articles on the subject of knife use in personal protection. – Terry

In this article, I will be discussing the use of the knife in "Pikal" or reverse grip, primarily with the edge facing in, as opposed to facing out.

Before discussing the actual usage, methodology, and reasons, here's a little background information on this method may be in order.

The first widely examined use of the knife with edge-in was done by Master at Arms James Keating on his 3 volume Drawpoint series of instructional videos.  In Drawpoint Vol. 1, he teaches the thrust from a forward of the hip waist carry, with the edge facing inward.  He then flows into rotary picking, and in subsequent volumes, expands it into slash & thrust and Palasut drills, taken from Filipino Martial Arts.

So, now that we have some background, the why's need to be answered.

Note from Daisy: The excellent information in this article is a starting point for learning to use a knife for self-defense. I strongly advise readers to seek professional training before you rely on an unfamiliar weapon or technique in a life-or-death situation.

Why would you hold the knife with the edge toward you?

The first question always asked is why do you hold the knife with the edge toward you and not the enemy?

This knife is designed to be held with the edge-in.

The answer is both simple, and deep.  The way our bodies work, we are stronger pulling then we are when pushing, which means our rips and cuts will be stronger.  Another reason is it allows for a ripping out and cut after the thrust.  RGEI (reverse grip edge in) is primarily a thrusting method. The shearing cuts and rips are used to clear obstructions, such as arms, out of the way to continue thrusting.

RGEI works as a reactive application of force, and it is uniquely applicable to close combat due to the use of gross body mechanics, in every facet, from the draw to the sewing machine like thrusting.  All these actions rely on gross body movement, which due to adrenaline and stress are the easiest, and most likely to succeed in a combative self-defense situation.

We draw the knife in a convulsive, full grip manner when using a fixed blade.  The wrist is locked, and the knife moves immediately from draw to thrust without any chambering or preparatory movements.

Simultaneously when drawing the knife while responding to an attack, we use our off, or live hand, as our defense, warding and clearing to make room for the knife to do its job.  If the attacker we are defending against happens to block our counter-attack, we hook and shear his arm out of the way.

By having the edge of the knife in, towards us, this creates a situation where we have de-fanged the snake, and also made a new opening to launch our next series of thrusts if required.  A very important thing to remember is that none of this occurs in a vacuum. We must never forget to fully integrate our other weapons available, such as using our live hand to punch and create openings and distractions for the thrusts and shears to be effective.

Additional Resource: Learn how to survive a knife attack here.

The knife can be used as a trapping method.

Another reason this method is effective is the possibility of using the knife as a trapping method.

By the edge biting into the arm, it is effectively neutralized, and easier to manipulate, if the opportunity arises.