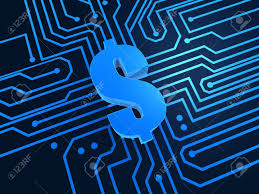 Why? Because they're developing something called Fedcoin, which would be based on blockchain technology.

If you're unfamiliar with blockchain technology, you're not alone. Here's how a piece on Motley Fool describes it:

The digital and decentralized ledger that records all transactions. Every time someone buys digital coins on a decentralized exchange, sells coins, transfers coins, or buys a good or service with virtual coins, a ledger records that transaction, often in an encrypted fashion, to protect it from cybercriminals. These transactions are also recorded and processed without a third-party provider, which is usually a bank.

Right now, Bitcoin is a popular form of cryptocurrency that operates using blockchain technology. Like the description above, Bitcoin is decentralized, its transactions are anonymous, and no central bank is involved.

But the irony is, the blockchain tech behind the Fed's idea isn't likely to be used the way Bitcoin uses it. Not even close.

Trillions Of Dollars Have Disappeared And Now The Fed's Doing This!

What If The Fed Did Nothing?