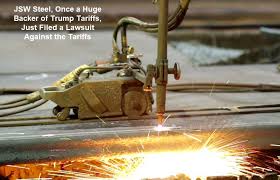 I Told You So!

Trump had a plan to Make America Steel Great Again.

Let's check in and see how well Trump's plan worked out for American producer JSW Steel.

The irony in this sad story is JSW Steel Praised Trump's Tariffs.

John Hritz, president and chief executive officer of JSW Steel USA Inc., put on a big smile and a Texas flag pin for his television spot on Fox Business in March 2018. "It's a special day," he told his host, then told her again: "It's a special day." JSW Steel's India-based parent company, JSW Group, had announced it would invest $500 million and create 500 jobs at its steel mill in Baytown, Texas. "We're going to make history," Hritz said.

Hritz was counting on help from President Trump, who three weeks earlier had announced his intention to impose tariffs of 25% on steel and 10% on aluminum imported to the U.S. The Fox anchor wondered if the import levies might interfere with JSW's Baytown plan, given that much of the raw steel processed at the mill was imported from India and Mexico. "Absolutely not," Hritz said. On the tariffs, JSW was "in lockstep with the president and with the administration."

Putchists in the Shadow of the Coronavirus

No March on Rome, Even

Why JFK Went to Texas

Reflecting on Crisis and Leviathan in the Age of the Pandemic

Coronavirus Missives from the Philippines, USA, France, Lebanon and Germany

What Will Be the New Normal After the COVID-19 Lockdown Ends?