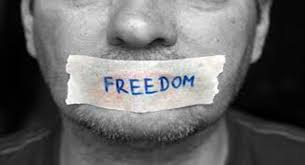 Today censorship is ubiquitous.  It is everywhere.  In the United States censorship is both imposed from above and flows from the bottom up.  Censorship is imposed from above by, for example, TV and print media, Google, Facebook, Twitter, and by laws in 28 states prohibiting criticism and participation in boycotts of Israel and by President Trump's executive order preventing federal funding of educational institutions that permit criticisms of Israel. Censorship flows from the bottom up by, for example, people of protected races, genders, and sexual preference claiming to be offended.

The ubiquitous censorship that today is characteristic of the United States has shut down comedians. It has shut down criticism of non-whites, homosexuals, transgendered, feminists, and Israel. Official explanations are shielded by labeling skeptics "conspiracy theorists."  The ubiquitous censorship in the United States is an extraordinary development as the US Constitution guarantees freedom of expression and a free press.

We owe journalist Abby Martin appreciation for reminding us of our right to free speech.  Aby is suing the state of Georgia, one of 28 states that have violated the Constitutional protection of free speech.