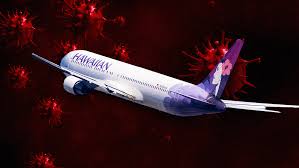 99 more passengers confirmed infected on the Diamond Princess, bringing the total to 454, or 26% of those tested so far.

Delta Airlines and Hawaiian Airlines now confirm a couple later diagnosed with coronavirus flew on their airplanes, with flights arriving at / originating from Honolulu.

Hundreds of passengers who shared a two-week cruise on board another cruise ship have already returned to their home countries, and now we find that an American woman on the ship has tested positive for coronavirus.

Another 99 people have been confirmed with the covid-19 coronavirus on board the ill-fated Diamond Princess cruise ship docked near Japan, bringing the total number of infections to 454. So far, just 1,723 people on the ship have been testing, meaning the infection rate is 26% among those tested.

What's notable about this is that 11 days ago, we had calculated an infection rate of 22% based on 61 confirmed cases out of 273 tested, and in response we were of course widely mocked and accused of "fear mongering" for projecting that, "over 800 people" would eventually be infected across the ship.

Now, 11 days later, we are staring at 454 infected people with about half the passengers tested so far. Suddenly the projection of "over 800 people" doesn't seem very far-fetched, does it?

Then again, everything the mainstream media is reporting today about the coronavirus was previously reported by the independent media 1-2 weeks ago.

In fact, as Paul Joseph Watson points out in this tweet, the UK Daily Mail is reporting today exactly the same thing that Zero Hedge reported last week but got permanently banned by Twitter for daring to publish:

In other words, those of us who report the real news more quickly than the establishment media are labeled "fake news" for being faster and more accurate.

It's worth noting that we are still permanently banned from Twitter, YouTube, Facebook, Google, Vimeo, Pinterest and every other platform you can imagine, merely for telling the truth more accurately and more quickly than the mainstream media propagandists and their Big Tech Orwellian censors.

But getting back to the Diamond Princess, it now looks like the total number of eventual infections will almost certainly exceed 800, and it turns out this cruise ship isn't the only one that harbored the coronavirus (see below).

49 Percent Of U.S. Companies Expect Layoffs "In The Next Three Months"...

Will the Dollar Always Rule? Ask the Archduke