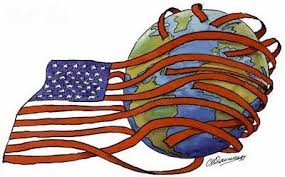 A considerable spectrum of the liberal West takes the American interpretation of what civilization consists of to be something like an immutable law of nature. But what if this interpretation is on the verge of an irreparable breakdown?

Michael Vlahos has argued that the US is not a mere nation-state but a "system leader" – "a civilizational power like Rome, Byzantium, and the Ottoman Empire." And, we should add, China – which he did not mention. The system leader is "a universalistic identity framework tied to a state. This vantage is helpful because the United States clearly owns this identity framework today."

Intel stalwart Alastair Crooke, in a searing essay, digs deeper into how this "civilizational vision" was "forcefully unfurled across the globe" as the inevitable, American manifest destiny: not only politically – including all the accouterments of Western individualism and neo-liberalism, but coupled with "the metaphysics of Judeo-Christianity, too".

Fear Is the Mind Killer

There's Powerful Evidence This Great Panic is Foolish, Yet Our Freedom is Still Broken ...

Zoom " the video conferencing platform used by businesses to stay afloat during coronavirus...