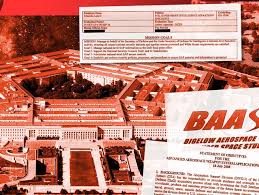 "Was it about UFOs? Of course," this person whispers with a grin of melodrama.

After almost a year of investigating the U.S. government's interest in UFOs, what they've just said should neither be shocking, nor revelatory. Unbeknownst to them, they've only further confirmed what over a dozen other people with backgrounds inside the government and the now-defunct Bigelow Aerospace Advanced Space Studies (BAASS) have already admitted to me.

Just like the fictional Robert Langdon, the path to understanding these mysterious government programs has taken me through the catacombs of informal secret societies, whose surprising memberships include accomplished professionals from the military, aerospace, academic, medical, and intelligence communities.

Though diverse or abstinent in how they define exactly what it all means, each of these enigmatic characters shares one common belief: unidentified flying objects are neither myth nor figment of overactive imaginations. With absolute conviction, they've all told me that UFOs are real.

The Coronavirus: A Conspiracy against the New World Order?

Both US aircraft carriers in the Pacific are taken out of action...

Due to the Coronavirus Hoax, Consider the Consequences of Martial Law and --

Dr. Fauci Concedes the Coronavirus Mortality Rate May Be Much Closer to a Very Bad Flu