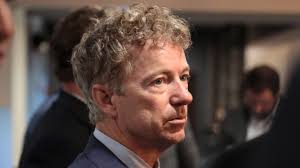 "It is a chilling and disturbing day in America when giant web companies such as YouTube decide to censure speech," Paul told Politico, which first reported the story. "Now, even protected speech, such as that of a senator on the Senate floor, can be blocked from  getting to the American people. This is dangerous and politically biased. Nowhere in my speech did I accuse anyone of being a whistleblower, nor do I know the whistleblower's identity."

YouTube spokesperson Ivy Choi said in a statement to Politico that YouTube has routinely taken down videos that name the alleged whistleblower ruling it in violation of its standards.

"Videos, comments, and other forms of content that mention the leaked whistleblower's name violate YouTube's Community Guidelines and will be removed from YouTube," Choi said. "We've removed hundreds of videos and over ten thousand comments that contained the name. Video uploaders have the option to edit their videos and exclude the name and reupload."

Paul read the name of the alleged whistleblower out loud on the Senate floor who has been identified as Eric Ciaramella by Real Clear Investigations but not independently verified by The Federalist after Roberts twice refused to allow Paul pose the question to the House impeachment managers during the Senate trial.