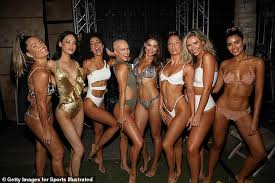 The Sports Illustrated Swimsuit Issue has revealed the final six picks for its 2020 #SISwimSearch — and they include a bald bombshell from Pennsylvania, a plus-size stunner from Maryland, and a 56-year-old knockout from California.

In October, the magazine first unveiled its 17 finalists for the search, spotlighting a string of sexy women that made up its most diverse cast ever.

These six women will go on to shoot a spread for the magazine in Turks & Caicos before one is named this year's winner.

The models first earned attention for walking in the Sports Illustrated Swimsuit Runway Show during Miami Swim Week on July 14 — and now, seven months later, they've been narrowed down to just six.

'I have to make a lot of decisions in this job,' editor MJ Day wrote on Instagram yesterday.

'There is no harder decision to make than selecting the final 6. Not even the cover. We meet amazing people through #siswimsearch.

'BUT! These six INCREDIBLE women represent so many things to so many people. I'm just proud and emotional that they want to share their beautiful journeys with you all through @si_swimsuit.

'Pay attention to them. To their stories. Cheer them on. Lift them up. Because in doing so, as one of our newly minted top six so eloquently states in her video "we leave the world a little bit of a better place". Congrats ladies!!'