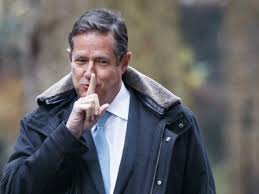 Barclays disclosed during Thursday's earnings report that financial regulators in Britain, including the Financial Conduct Authority (the British equivalent of the SEC) and the Prudential Regulation Authority, are investigating the bank's CEO over his 'friendship' with Epstein.

The regulators are investigating "Mr. Staley's characterisation to the company of his relationship with Mr. Epstein and the subsequent description of that relationship in the company's response to the FCA."

Shareholders have nothing to worry about, the bank insisted, because Staley has been 100% transparent about the relationship since Epstein's arrest last year. Epstein committed suicide in August - or at least that's the 'official' story. Many suspect that the financier was secretly murdered by one of the many powerful people in his orbit, and this belief has since become one of the most widely accepted 'conspiracy theories' in the US, the AP reports.

Barclays said in a statement to the London Stock Exchange that "as has been widely reported, earlier in his career Mr. Staley developed a professional relationship with Mr. Epstein." Since joining Barclays in December 2015, Staley hasn't had any contact with Epstein, the bank said.

Department of Justice Sues Sanctuary States and Threatens State and City Officials with ...