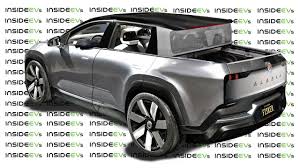 Henrik Fisker seemed excited to share the rear perspective of a possible future Fisker pickup in a tweet with the caption "Electric pick up!", but that tweet was quickly taken down. And when Car and Driver inquired with the company, Fisker officially confirmed the tweet was "unintentionally sent" by Henrik, which is why it was deleted shortly thereafter.

According to a Fisker spokesperson:

"We can't confirm the model or name of a vehicle that may have been seen in the tweet. We can, however, confirm that Fisker Inc. is indeed working on a modular electric vehicle platform that may underpin several different affordable EV models in the future."

What is clear is that Fisker is at least considering making its own all-electric pickup, following the recent explosion in the number of such projects. There's the internet-breaking Tesla Cybertruck, but also the Rivian R1T, the Bollinger B2, as well as other announced models from established automakers like Ford and General Motors.

Rivian Releases New Video: How Much Has The R1T Improved?