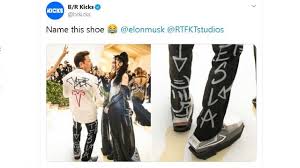 Update: It's come to our attention (thank you, dear reader) that the outfit in the above image was heavily altered from the original, which was originally featured in Vanity Fair. So, the Tesla branding appearing on Musk's jacket and pants in the image above never really existed. The awesome Cybertruck-themed shoes? Also not real. In the immortal words of Seinfeld's Elaine Benes, "Fake, fake, fake, fake."

While this does not necessarily take away from the main point of this post, we thought we should share this extra context.

It may be a stretch to think that Tesla and SpaceX CEO Elon Musk would dive into the shoe biz. However, he's no stranger to new ideas and new companies. In addition, Musk is known to ponder, propose, and follow through with crazy ideas. Think, Tesla Cybertruck and The Boring Company. Heck, even the idea of Tesla itself, along with the whole solar roof and Full Self-Driving concepts are still super-weird to many people.