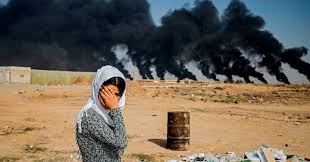 Just like "Russiagate" and the Mueller investigation, and a number of other attempts to overturn the 2016 election.

We've had three years of accusations and investigations with untold millions of dollars spent in a never-ending Democratic Party effort to remove President Trump from office.

Why do the Democrats keep swinging and missing at Trump? They can't make a good case for abuse of power because they don't really oppose Trump's most egregious abuses of power. Congress, with a few exceptions, strongly supports the President flouting the Constitution when it comes to overseas aggression and shoveling more money into the military-industrial complex.

In April, 2018, President Trump fired 100 Tomahawk missiles into Syria allegedly as punishment for a Syrian government chemical attack in Douma. Though the US was not under imminent threat of attack from Syria, Trump didn't wait for a Congressional declaration of war on Syria or even an authorization for a missile strike. In fact, he didn't even wait for an investigation of the event to find out what actually happened! He just decided to send a hundred missiles – at a cost of hundreds of millions of dollars – into Syria.

"Public" Health is the Health of the State

There's Powerful Evidence This Great Panic is Foolish, Yet Our Freedom is Still Broken ...

The Dissolution of the West

Best Take on When the COVID-19 Drama Will End

Amazon Shows "No Respect" For Warehouse Workers During Coronavirus