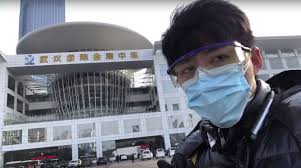 Chen Qiushi looked haggard and disheveled in his online posts, an almost unrecognizable shadow of the energetic young man who had rolled into Wuhan on a self-assigned mission to tell its inhabitants' stories, just as authorities locked the city down almost three weeks ago.

Until he disappeared last week, the 34-year-old lawyer-turned-video blogger was one of the most visible pioneers in a small but dogged movement that is defying the ruling Communist Party's tightly policed monopoly on information.

Armed with smart phones and social media accounts, these citizen-journalists are telling their stories and those of others from Wuhan and other locked-down virus zones in Hubei province. The scale of this non-sanctioned storytelling is unprecedented in any previous major outbreak or disaster in China. It presents a challenge to the Communist Party, which wants to control the narrative of China, as it always has since taking power in 1949.

"It's very different from anything we have witnessed," said Maria Repnikova, a communications professor at Georgia State University who researches Chinese media.

Never have so many Chinese, including victims and health care workers, used their phones to televise their experiences of a disaster, she said. That's partly because the more than 50 million people locked down in cities under quarantine are "really anxious and bored and their lives have pretty much stopped."

Official state media extol the Communist Party's massive efforts to build new hospitals in a flash, send in thousands of medical workers and ramp up production of face masks without detailing the underlying conditions that are driving these efforts.

Chen did just that in more than 100 posts from Wuhan over two weeks. He showed the sick crammed into hospital corridors and the struggles of residents to get treatment.

"Why am I here? I have stated that it's my duty to be a citizen-journalist," he said, filming himself with a selfie stick outside a train station. "What sort of a journalist are you if you don't dare rush to the front line in a disaster?"

Is there any BENEFIT to vaccines at all? Death rates very similar in vaccinated vs. unvaccinated reg