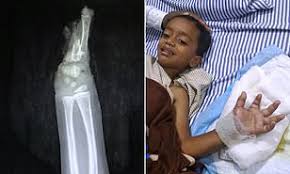 A four-year-old boy had his whole hand reattached after slicing it off with his father's lawn mower.

Shaurya Undre amputated his left hand in an agonising accident, but x-rays showed most of the wrist bone remained.

At hospital near his home in Manjri, India, surgeons were keen to give him the best chance because he was so young.

They stitched every nerve and blood vessel back into place under a microscope during a painstaking six-hour operation.

Pictures show Shaurya smiling after the procedure, and he has been able to wiggle his fingers since, local media report.

Shaurya amputated his left hand on January 31 when he was playing with his father Mukesh's grass cutting machine.

He was taken five miles from his home to Noble Hospital, where specialist micro-vascular surgeon Dr Abhishek Ghosh treated him.

He said: 'Seeing the young age of the child it was decided to attempt to salvage the hand.