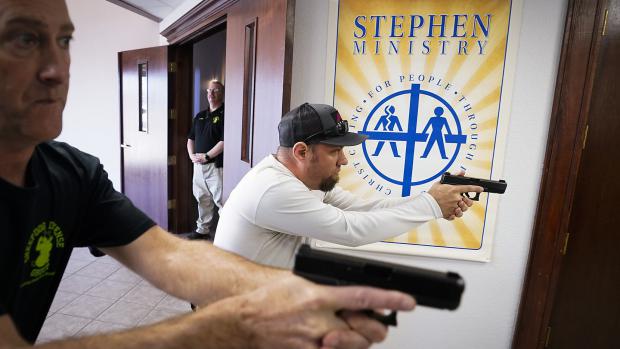 HURST — Beneath the Christmas lights still hanging in the church's fellowship room, Jack Mills pointed a Glock handgun at his enemy's chest and pulled the trigger.

A loud crack rang out as a shell casing flew from the weapon, but the man facing the gunfire didn't fall. Instead a red light on his high-tech vest began blinking, signaling a hit from the laser in Mills' gun.

A U.S. Air Force veteran, Mills began designing the equipment a year ago to help armed churchgoers learn how to confront a gunman. Shooting a paper target is one thing, Mills said. Firing at a real person is another.

"If you haven't shot somebody in the face, how do you know you can?" he said.

Mills is part of a growing cottage industry in Texas that uses police-like tactics to train churchgoers who fear the next attack could target their house of worship.

Requests for help spike after each tragedy, businesses said. The most recent came in December, when a man opened fire during Sunday service at a White Settlement church and killed two worshippers, before he was fatally shot by an armed congregant.

"They're Getting The Sh*t Kicked Out Of Them": Antifa Attempt To Riot In California Su