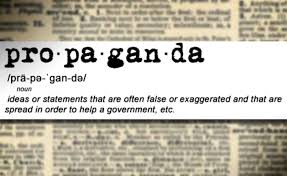 The Trump administration has assassinated Iran's top military leader, Qassim Suleimani, and with the possibility of a serious escalation in violent conflict, it's a good time to think about how propaganda works and train ourselves to avoid accidentally swallowing it.

The Iraq War, the bloodiest and costliest U.S. foreign policy calamity of the 21st century, happened in part because the population of the United States was insufficiently cynical about its government and got caught up in a wave of nationalistic fervor. The same thing happened with World War I and the Vietnam War. Since a U.S./Iran war would be a disaster, it is vital that everyone make sure they do not accidentally end up repeating the kinds of talking points that make war more likely.

Let us bear in mind, then, some of the basic lessons about war propaganda.

Things are not true because a government official says them.