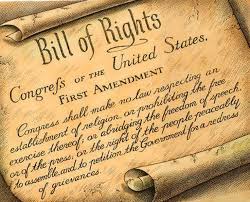 During the course of my talk, I made the following statement: "The First Amendment does not give people the right of free speech."

I asked the students whether my statement was correct or incorrect. Everyone immediately told me that I was wrong. They said the First Amendment did in fact give people the right of free speech.

I held my ground. I said it didn't, and I pressed the students to figure out why I was maintaining my position. They were just as steadfast in their position, until a girl raised her hand and said, "Mr. Hornberger is right. The First Amendment does not give people rights. It prohibits the government from infringing on rights that preexist the government."

She was absolutely right.