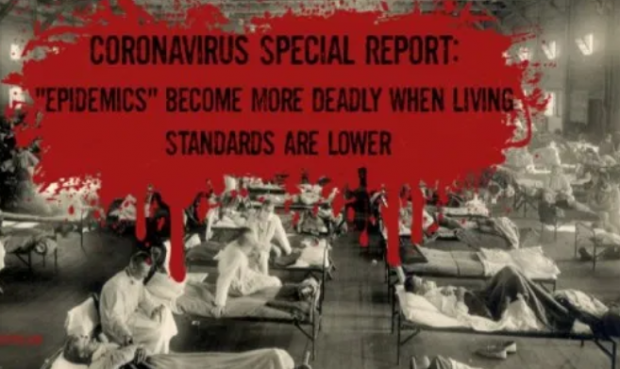 Year after year, the world's public is subjected to a fear campaign surrounding some frightening disease, from Zika virus to Ebola. Each year Western audiences, in particular, are browbeaten with fear over a disease that, one year later, is scarcely remembered. What is remembered, however, is the reaction of federal, local, and state governments and the ever-growing authoritarian "solutions" provided.

The solutions always take the form of "discussions" over even greater violations of individual rights, forced vaccination, dislocation, forced quarantine, and medical tyranny.

This year's disease is coronavirus, a SARS-like upper respiratory illness that has allegedly killed over 40 people in China and is allegedly popping up all over the world, including here in the United States.

For the purpose of this article, we will leave aside questions of how this virus suddenly appeared, its origins, real dangers, and how it is spreading so fast. Assuming that the threat of coronavirus is real, there are a number of solutions to the festering pandemic that are acutely being ignored.<

Travel bans from affected areas, greater screening at airports and other national access points, particularly the U.S./Mexico border have all been largely ignored until recently. A comprehensive policy of treatment and containment of the disease that does not entail the implementation of martial law and the violation of Constitutional rights also appears to be nonexistent.

Yet there is also a more long term set of solutions that must be implemented in order to prevent the disease from spreading and to prevent its appearance in the first place. The end of austerity, the rebuilding of economic opportunity, access to proper nutrition, and the progress and development of the American health system are all essential to treating and preventing coronavirus and outbreaks from diseases like it.

Throughout history, plagues and disease epidemics can be traced directly to austerity, low living standards, and/or poor sanitation conditions often coupled with inadequate nutrition and lack of available treatment. War and periods of struggle are also precursors to epidemics.

Any one of these conditions can themselves beget plague and disease. Yet, when taken together, they are a recipe for devastation and plague. There are numerous examples of the connections between lower living standards and the decline of public health throughout history. To comment on all of them would be outside of the scope of this article. However, a few of these parallels must be drawn.

When discussing the emergence and ramifications of mass plague, one cannot avoid discussion of the Bubonic Plague or Black Plague/Black Death. Indeed, anytime there is the consideration of an epidemic that threatens to become massive in scale and even a pandemic, discussions of the Black Plague rise back to the surface. Although usually presented by mainstream outlets and medical propagandists as an example of what happened to a primitive people in a time before drugs and vaccines as well as the possible consequences of the lack of total fealty to the medical establishment today, the Black Plague had its roots in much more basic and wide-reaching sources than mere medical treatment options.

Rabobank: Markets Need To Start Pricing For One Of Two Things - One Bad, The Other Terrible