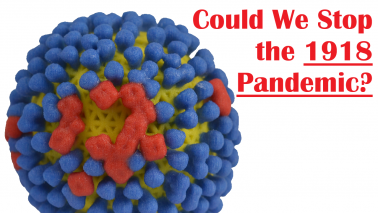 In 1918, the great influenza pandemic killed as many people in 11 months as the medieval Black Death did in 4 years. Ultimately, at least 50 million may have perished. Young healthy people, especially young soldiers headed off to the front in World War I, succumbed quickly. To avoid interfering with the war effort, the U.S. government denied and covered up the threat, preventing the implementation of public health measures.

Since then, the world has gotten smaller. A virus that jumps the species barrier from animals to humans in a meat market in China can cross the Pacific in hours. And despite the expenditure of $80 billion on a National Biologic Defense, the U.S. is arguably no better prepared than it was in 1918, state Steven Hatfill, M.D., and coauthors in their new book Three Seconds until Midnight.

As in1918, we lack a vaccine or wonder drugs, but must rely on non-pharmaceutical interventions (NPI), and on public health authorities to track and try to contain the spread of infection.

Accurate information is critical. Can we trust governmental authorities to tell the truth? Travel restrictions, quarantine, closing businesses, and cancelling public events have a huge economic and potential political cost.

There can also be incentives to exaggerate the threat, in order to sell poorly tested vaccines or drugs. The 1976 swine flu epidemic was almost a non-event; more people were probably injured or even died from adverse effects of the heavily promoted vaccine.

1 Comments in Response to The Corona Virus--1918 All Over Again?

One of many: "ClorDisys offers trusted and highly effective solutions for all of your on-site and off-site decontamination service and equipment needs. Utilizing chlorine dioxide gas, the industry's most effective sterilant, ClorDiSys can eliminate all your microbiological contaminants, including bacteria, viruses, molds, spores, and even beta-lactams and pinworms. Chlorine dioxide is safe on materials and leaves no post treatment residuals, making it safe to use in the most critical environments," - https://clordisys.com/ --- Or, heal yourself - https://g2churchnews.org/ - including: "Controversial topics with Mike Adams, The Health Ranger! 1/19/20 ."

Rabobank: Markets Need To Start Pricing For One Of Two Things - One Bad, The Other Terrible