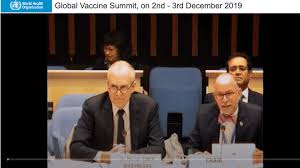 Under the cover of the 2019 holidays, Big Pharma planted a couple of initiatives to drive vaccine uptake and compliance through the roof well into the next decade. Beyond the mandates passed in California and New York, and then the blowback in New Jersey—the failed attempt to ban religious exemptions—combined with the hysteria over the measles outbreak in Samoa at the end of last year, it seemed Big Pharma and its proxies owned the momentum heading into 2020.

Then something strange happened.

In the first week of December, the WHO hosted the Global Vaccine Safety Summit in Geneva, Switzerland. Instead of "business as usual," the two-day conference fell into an unusual intellectual gridlock. Doubt seeped into the pro-vaccine "choir" of doctors and scientists.

Apparently, the WHO's experts and their colleagues questioned the science on vaccine safety. Come again? One can imagine a pin-dropping along with slacked jaws hitting the floor. But then videos emerged showing the speakers, presenters, and bureaucrats discussing gaps in safety, the validity of efficacy, and the decline in "trust" with the global vaccine program. Instead of the WHO and its minions falling in line, as they had done so in the past, they discussed, debated, and even argued about the failing medical and public "belief" in how safe and effective vaccines really are.

The Irony of 'Vaccine Hesitancy'

In a moment of mammoth-size irony, the once preachy World Health Organization ended the year with a whimper. Recall that 2019 began with the WHO chanting "vaccine hesitancy" was one of the top ten threats to global health.

Air leaked out of the vaccine safety balloon. People were no longer willing to roll up their sleeves to obediently receive an endless series of shots for infections that did not impact their daily lives. The public has been increasingly questioned the merits of vaccine claims, so are frontline medical professionals and scientists.

And that created the WHO's own form of vaccine hesitancy, growing from sober discussions about the "loose" science behind vaccines being "safe and effective."

Where has this discussion been for the past thirty years?

At the Vaccine Safety Summit, cracks appeared in their collective narrative. Talking points turned into questions. Many of the scientists in attendance placed vaccines under the microscope for the first time since the illegal Simpsonwood meeting in 2000. Naturally, some of the CDC cult members who also attended the Simpsonwood conference sat through the year-end maelstrom of doubt as the discussion moved from defending the vaccine program to questioning adjuvants and the lack of safety studies.

Former CDC scientist, Dr. Robert Chen, was in attendance. He looked a bit miffed, if not flustered, about the discussion, since he thought vaccine science was settled. Robert Chen is the director of Brighton Collaboration for The Task Force for Global Health—a consortium founded in 1984 by former CDC directors. He worked for three decades at the CDC on the Vaccine Adverse Event Reporting System (VAERS), the Vaccine Safety Datalink (VSD) Project, and the Clinical Immunization Safety Assessment (CISA) Network.

And Walter Orenstein was present. He is the director of the CDC's National Immunization Program (1993-2004), who hosted the Simpsonwood meeting, presented at the WHO Vaccine Safety Summit.