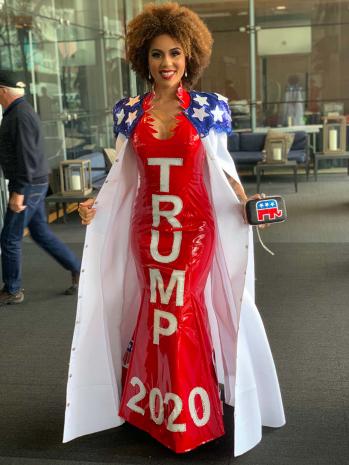 Both the gown and Villa's white coat with cape sleeves, crafted of surplus white mesh sports fabric that a company donated to designers in Portland, according to the musician, were custom-made by Desi Allinger of Desi Designs. As was her red  ostrich feather hair accessory.

Alinger tells The Hollywood Reporter: "The collar of Joy's latex dress was inspired by a neckline on a dress by Alexander McQueen, and the coat is inspired by our First Lady [Melania Trump], I just picture her in this. So yah, U.S.A.!"

"I feel like Miss America in this; it's all couture," Villa tells THR before the awards show, adding, "He's going to be the first President in history to be impeached and re-elected." She described the process as "a total sham," explaining that the process was "confusing most Americans."

Asked whether she had shared her fashion plans with Trump in advance of the show, she said, "He'll be surprised. I just told Ivanka and the White House that I'm going to wear something to be supportive. I don't let anyone know the message beforehand."

Created and sent to her by a fan, Villa's glittery black handbag is embellished with a beaded red, white and blue Republican elephant motif, while her Uplift by Lily pumps are decorated with a patriotic stars and stripes flag pattern.

Villa told THR that the look is a partnership with ViralPAC (as stated on the side of her dress), an organization funding conservative artists to  support the re-election of President Trump and conservative candidates in 2020.