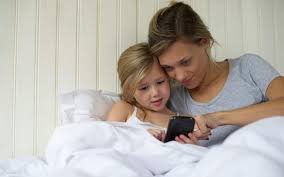 A recent survey of 1,000 British parents found that the average parent spends a mere five hours per week communicating face-to-face with their children.

More than half of surveyed moms and dads with children under the age of 18 said they feel "distant" from their kids. In all, 43% blamed their measly family time on their kids spending too much time in front of the television, with another 51% saying their kids spend too much time in their bedrooms. Another 44% said their familial disconnect is a result of their kids logging inordinate amounts of time on their phones during traditional "family time" in the evening.

The study, commissioned by Cadbury Heroes, also found that the average youngster starts to really avoid his or her parents around the age of 13. A significant 73% of respondents said their relationship with their children really changed once their sons and daughters became teenagers.

Nearly half (46%) of surveyed parents said they only talk to their kids for a maximum of four hours each week. Meanwhile, 54% said they would love to spend more time with their children.