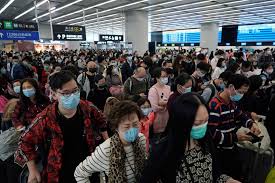 The number of confirmed cases around the world climbed sharply to more than 850, with at least 26 deaths, all of them in China.

Meanwhile, France announced that three people had fallen ill with the virus — the disease's first appearance in Europe. And the United States reported its second case, involving a Chicago woman in her 60s who was hospitalized in isolation after returning from China.

On Wall Street, stocks slumped amid fears over the widening crisis, with the Dow Jones Industrial Average losing 170 points and the S&P 500 posting its worst day in three months. Health care companies suffered losses, along with financial institutions, airlines and other tourism and travel industry businesses.

Transportation was shut down in Wuhan, the city of 11 million at the epicenter of the outbreak, and in at least 12 other cities in central China's Hubei province, encompassing a population bigger than that of New York, London, Paris and Moscow combined.

10 Plagues That Are Hitting Our Planet Simultaneously