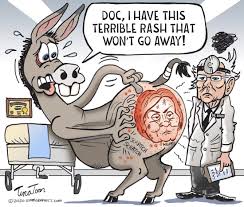 So says Hillary Clinton of her former Senate colleague and 2016 rival for the Democratic nomination, Bernie Sanders.

Her assessment of Sanders' populist-socialist agenda?

"It's all just baloney and I feel so bad that people got sucked into it."

Does that assessment still hold with Sanders now running strong in Iowa, New Hampshire and Nevada, and having emerged, according to The New York Times, as "the dominant liberal force in the 2020 race"?

"Yes, it does," said Clinton, who left open the possibility she might not support Sanders if he became the nominee.

In her interview with The Hollywood Reporter to promote a documentary that premieres Saturday at the Sundance Film Festival, Clinton also tore into Bernie's backers.