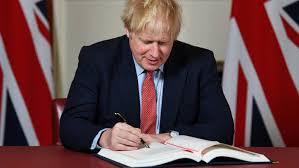 That will likely entail a historic realignment of its foreign policy interests from the Middle East and Africa to the "Indo-Pacific," one of the three "primary centers of the global economy and political influence", after North America and Europe, according to the United Kingdom's last National Security Capability Review published in March 2018.

The Indo-Pacific is currently home to most of the world's largest and fastest growing economies, as well as the center of US-China geopolitical competition, which isn't likely to dampen down anytime soon.

Where and how a refocused UK will fit into the Indo-Pacific isn't immediately clear. Australia and Japan are two of the UK's closest security allies, while London is also apparently keen to raise its profile among Southeast Asia's ascendant nations, some of which are former British colonies.

Britain opened its new mission to the Association of Southeast Asian Nations (ASEAN) in Jakarta on January 15, and hopes to become an independent dialogue party to the 10-member bloc after it leaves the EU.

Assange's US Extradition Hearing Opens Monday: The Fight for the Free Press Is Now On

Londoners rally for Assange ahead of extradition hearing

Farage: 'We Didn't Free Britain From Brussels Only to Bow Before Beijing'