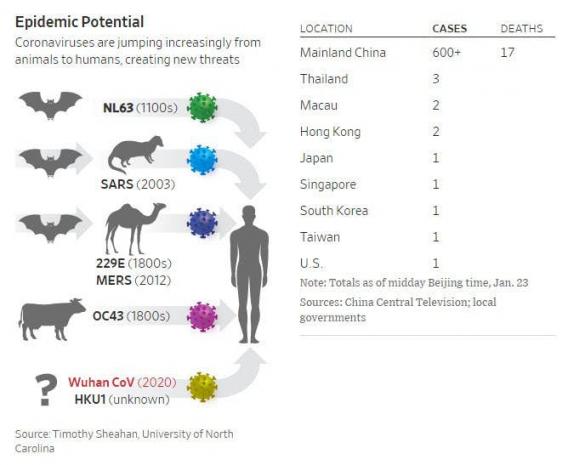 Coronaviruses mutate easily and can jump from animals to humans. Wuhan, population 11 million was locked down yesterday. 8,000 busses and all subline lines in Wuhan are now shut down.

Huanggang, a city of about 7.5 million people, about 35 miles east of Wuhan is now quarantined.

This is What We Know About the Wuhan Coronavirus.

What is a coronavirus?

The Wuhan virus belongs to a family of viruses known as coronaviruses. These viruses, named for the crown-like spikes on their surfaces, infect mostly pigs, cats and other animals. But they mutate easily and can jump from animals to humans, and from one human to another. In recent years, they have become a growing player in infectious-disease outbreaks world-wide.

How is the virus spread among humans?

Seven strains are known to infect humans, including the virus in Wuhan. They can be spread by coughing, kissing or making contact with saliva, Chinese officials say. Four of the strains cause common colds. Two other strains, however, have been extremely deadly: Severe acute respiratory syndrome, known as SARS, and Middle East respiratory syndrome, or MERS, are coronaviruses.

What are the symptoms of illness and how do you know if you have it?

Patients have had a fever, cough and other symptoms of pneumonia. Public-health officials have developed diagnostic tests, which are being used to confirm whether a patient has the Wuhan coronavirus or another infection. Five major airports in the U.S. are screening arriving international travelers for fever; those who have one are then screened for other symptoms.