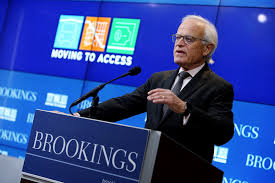 ithin the inner precincts of the American foreign policy establishment, last names are redundant. At a Washington cocktail party, when some half-sloshed AEI fellow whispers, "Apparently, Henry is back in Beijing to see Xi," there's no need to ask, "Which Henry?" In that world, there is only one Henry, at least only one who counts.

Similarly, there is only one Martin. While Martin Indyk may not equal Henry Kissinger in star power, he has for several decades been a major player in U.S. policy regarding Israel and the Middle East more broadly. Founder of the Washington Institute for Near East Policy, senior director on the National Security Council, twice U.S. ambassador to Israel, assistant secretary of state for Near East affairs, presidential envoy—not a bad resume for someone who was born in London, raised in Australia, and became a U.S. citizen only in his 40s.